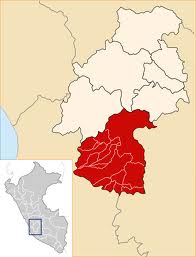 Huaytará is a picturesque town.  It is known as the Archaeological capital of Huancavelica, according to oral tradition the word "Wayta" means flower I add the suffix "raq" to call it Waytaraq which means "flower" because it is the hope of its people see to Huaytara flourish economically.  The city is located Huaytará in the region to 2726m.snm Quechua to 215km. In the city of Huancavelica via Rumi Chaka (liberators).  It has an area of 6,458.39 km with a population of 3.830 inhabitants. It is bordered on the north Castrovirreyna, Huancavelica and Hangars, with Ica south and west, east to Ayacucho.  Huaytará province was created on November 26, 1984. Prior to this date was a district which belonged to the province of Castrovirreyna, but as a people existed before the viceroyalty, under Law No. 23394.  The main attraction in the city of Huaytará is the church for its architecture and colorful.  This church has a great archaeological value of polished rock its foundations were the walls of an ancient Inca palace, where dwelt the curaca who ruled the valley.  You can find detailed information and pictures of this church in the following page: http://www.antropologia.com.ar/

Economic activities in the province of Huaytará

The province is mainly Huaytará cattle, whose milk production is important and this product caters to the markets of Ica and Lima.  Besides breeding and care of llamas, vicuna and alpaca Huaytará makes it one of the most important cities of Huancavelica for meat and wool of these animals are well traded in the markets of the country and abroad.  In agriculture in their fields are cultivated potato tuber that is world famous, well cultivated beans, beans, alfalfa and fruit trees.

Health facilities that provide public attention on Ocoyo and Cordova districts belong to the Department of Health - DISA Huancavelica, according to the categorization of Ocoyo establishment has two health posts of category I-1, have a Technical Nursing and / or nurse and / or midwife and a health class I-2 this type of category in addition to a nursing technician and / or nurse and / or have a GP Obstetrician in the district Cordova despite having more population has only two health facilities in category I-1 and I-2.

According to information obtained from the Regional Directorate of Huancavelica the causes of disease more common in these districts are those that affect the respiratory system due to the climatic characteristics of the area, especially in the winter time, followed by diseases oral cavity, mainly by the lack of oral hygiene and lack of professionals to develop information and prevention campaigns; also lesions, skin diseases, digestive system problems and others.

The health insurance coverage according to the Census 2007 show that in the district of Cordova Ocoyo and the 61.07% and 56.26% have some type of health insurance, but despite the coverage of more than 50% of the population, 38.98% and 43.74% is still unprotected.